This waterfront home on sale Sibenik Riviera Croatia is located in the first row to the sea and beach in small village of Sibenik area.

This is large house of 380 square meters laid on 3 floors. Each floor has one apartment, and each apartment with a separate entrance. The closest access to the sea is just across the street in front of the house. The main floor apartment consists of a bedroom, a large living room with air conditioning. It has a kitchen with a dining area, a bathroom, and a very large patio deck on the southern side. The second–floor apartment consists of two bedrooms, both with air conditioning. One of two-bedroom has an additional toilet. The apartment has a nice and modern bathroom and a kitchen. The smaller bedroom and the kitchen have a joint long and narrow balcony with a beautiful seaside view. The larger bedroom has a small balcony on the other side. The third–floor apartment consists of three bedrooms, a large open space living room with a dining area and kitchen, and a nice balcony with a beautiful seaside view. Two of the bedrooms have air conditioning and en suite bathrooms with showers. The third bedroom next to the open kitchen has a shower.

Land plot has 430 square meters. Garden is rich in lush greenery and provide total privacy on the terraces. There is enough space for parking of several cars. House is connected to the electricity and city water system. All amenities are at walk distance. There are boat moorings in front of the house. Price for Waterfront home on sale Sibenik Riviera Croatia is 450 000 EUR.

Sibenik is a historic city located in the central part of the Croatian coast on the Adriatic sea where the beautiful river Krka flows into the Adriatic. It is a centre of the county of Sibenik and Knin and it extends along the 100 km long coastline from Zadar to Split while laying under the Dinara mountain in the hinterland area. In the centre of Sibenik, you can visit the theatre of Sibenik which was built in 1870 and is today, the oldest theatre buildings that is still used, and has been the host of the famous International Children’s Festival for 50 years in a row. The fortress of St. Michael dedicated to the patron of Sibenik and one of four that are situated around the city centre is definitely worth a visit. Another fortress that is worth of your visit is the beautiful renaissance fortress of St. Nicholas, and with the fortress of St. John, these three represent the symbol of Sibenik’s fight and resistence. Sibenik’s hinterland has towns that are an important part of its history, such as Knin with its magnificent fortress, Drnis that holds the mausoleum of the Croatian artist Ivan Mestrovic, and the smallest town in the Region, Skradin, located near the Krka National Park. 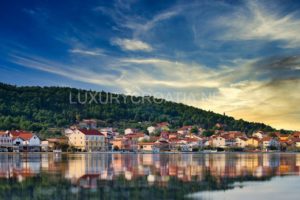 Find your route to Sibenik here.

Find out more about Sibenik here.