Sibenik, rich in history and heritage

Sibenik – rich in history and heritage

Today, Sibenik has good connections to the surrounding areas, all due to its good road traffic position, and the air traffic which is available from Split’s Kastela Airport (45 km away) or Zadar’s Zemunik Airport (50 km away).
When Sibenik was given the official status of a town in the 13th century, the construction of today’s symbol of Sibenik began, the cathedral of St. Jacob. This cathedral in under protection of UNESCO since 2000, due to how unique and complex the construction of the same was. Besides this cathedral, there is a number of churches to explore in Sibenik, some of which have been transformed into galleries, museums or other spaces. The city centre is, just as other Dalmatian centres, characterized by the narrow Mediterranean streets and old houses.
In the centre of Sibenik, you can visit the theatre of Sibenik which was built in 1870 and is today, the oldest theatre buildings that is still used, and has been the host of the famous International Children’s Festival for 50 years in a row. The fortress of St. Michael dedicated to the patron of Sibenik and one of four that are situated around the city centre is definitely worth a visit. Another fortress that is worth of your visit is the beautiful renaissance fortress of St. Nicholas, and with the fortress of St. John, these three represent the symbol of Sibenik’s fight and resistence.
Sibenik’s hinterland has towns that are an important part of its history, such as Knin with its magnificent fortress, Drnis that holds the mausoleum of the Croatian artist Ivan Mestrovic, and the smallest town in the Region, Skradin, located near the Krka National Park. 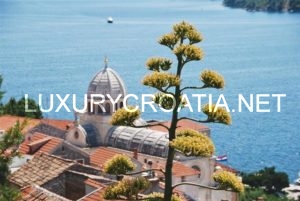 Not so far from Sibenik, you can visit two national parks, the 35 km long Kornati islands known for their irregular bizarre shapes and the Krka national park, where you can visit the islet Visovac and see Skradinsi buk, or you can just relax in the shadows, watch the waterfalls or go for a swim.
The Sibenik- Knin county of Croatia has an interesting mix in their gastronomy offer, combining the continental and Mediterranean cuisine. Due to the cold and widy winter months in the hinterland, this area is said to produce some of the best proscuitto in Dalmatia. Most often, the proscuitto is combined with the tasteful goat cheese specialty and bread. Besides the white and blue fish such as sardines, anchovies, tuna all sorts of crab, shells and other fish specialties, the meat lovers will definitely enjoy eating young lamb which can be prepared in different ways, most often accompanied with potatoes or seasonal vegetables. Don’t hesitate to try the locals favourites- Pasticada, a stewed beef dish made with home made gnocci, or soparnik- a salty crusty pie filled with chard and olives, often served as an appetiser. Another way to welcome the visitors to our gastronomy is enabled by aperitifs such as loza or travarica ( grape and herb brandy) or with figs, whether they are dried or fresh, depending on the season when they are served. To circle the meal, you can enjoy the famous wines such as the fantastic red wine Babic from Primosten’s famous vineyards, or the rosé (locally called opolo), with a long tradition in this region. Don’t worry for your sweet tooth either, the local rozata, fritule or krostule are there to guarantee your satisfaction.

If you are interested in renting a Villa in Sibenik, you can find them here: Rent Villa in  Sibenik

If you would like to buy a property in Sibenik, you can find them here: Real estate for sale Sibenik