Croatia Murter area sea view house for sale is located only 100 meters from the Adriatic sea and has 525 square meters.

House is west oriented and it is positioned 150 meters from the beach. The whole lot size of the house has 1100 square meters. It consists of 11 apartments and has total of 25 bedrooms. There are 2 more apartments on the ground level and one room that can be turned into studio apartment. House features a 30 sq.m. basement, garage and a parking space for up to 5 cars. At the rooftop is a solar system providing the whole house warm water. Price for Croatia Sibenik Murter area sea view house for sale is 590 000 EUR. On the north side of the house, on the ground floor is a separate 44 sq.m. apartment which is not included in price, but the owners are willing to negotiate about selling. 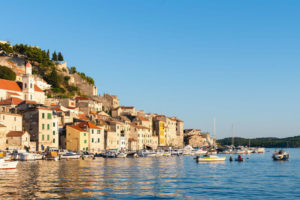 Find your route to Murter here.

Find out more about buying property in Croatia here.