SOLD: House for sale with large garden in Orebic

House for sale with large garden in Orebic

It consists of two apartments each with an open plan kitchen, living and dining area, one bedroom and a bathroom.
It consists of a garage which has 30 square meters and two large terraces.
One of the apartments has an exit on a large terrace with an outdoor fireplace and another one on the garden.
The whole house is on the ground floor, but it is possible to build another one on this lot.

The house is airconditioned and connected to electricity and city water, and has a septic tank.

The house is 1 km away from the sea.

House for sale with large garden in Orebic is surrounded by a lot of greenery.

House is located on the outskirt of a building zone.

This lovely, little town is another hidden gem in South Dalmatia, on the southern coast of the Pelješac Peninsula.
It’s also a relatively undiscovered and therefore a relaxing and quiet place to stay.

Orebic is located towards the tip of the Peljesac Peninsula, opposite the island of Korcula. Once upon a time very well known for its maritime industry – which reached a peak in the mid-19th century during the Austro-Hungarian – these days it is probably the best-known resort on the Peljesac Peninsula.
It is home to some lovely beaches, including that rarity in Croatia – sandy beaches! (Check out Trstenica Beach in particular.)
The area is also a suitable location for a range of activities, including surfing and diving.

Learn more about Orebic on this page: Orebic

If you need to plan your route to Orebic, click here: ViaMichelin 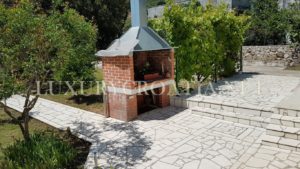