Apartment for sale in Vodice near Sibenik

Apartment for sale in Vodice near Sibenik

Apartment for sale in Vodice is a 2 bedroom apartment situated in Vodice, a small tourist town near Sibenik. Apartment building is easily accessed by asphalted road. This great apartment for sale has a parking space in front of the building and the surrounding is quiet. Apartment is located on the first floor of an apartment building and consists of open plan living room with dining area and kitchen, bathroom, 2 bedrooms and a terrace. Apartment is furnished, and furniture is in the price. Apartment has a surface area of 45,66 m2.

There is 10 minutes walk to the seafront in the center of Vodice. Apartment is walk distance to shopping mall.

Vodice is a very popular tourist destination in Croatia, with most of the population oriented towards tourism and providing accommodation for visitors in hotels, apartments and houses. Vodice has a variety of pebble and sandy beaches.

If you want to know more about town Sibenik, click here: Sibenik 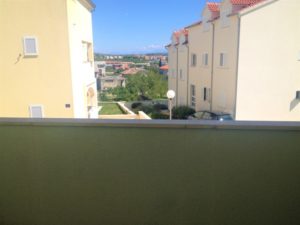