Second Row Sea House for sale in Greenery Marina area has organized garden and outside living area with fireplace and additional storage house 18m2 which is fully furnished and situated next to the main house. Main house is detached with 176m2 living area and has completely furnished ground floor but the second floor is half furnished so anyone can arrange by their taste. Lot area is 340m2 and distance from the sea is only 50 m! It is situated in very quiet area and surrounded by nature.
House has all the needed documents and it was build in 1987. but was adapted in 2012.
There is a parking place available for 3 cars. 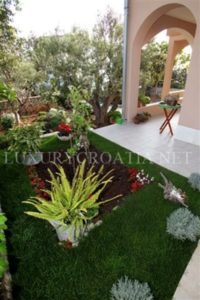 Trogir is a remarkable small town with 2300 years of tradition, set on a small island on the Adriatic coast of Croatia in the center of Dalmatia. Hiding not so far away from Split, only 27 km, it is connected to the mainland and with another island, Ciovo with bridges. The historic city center is under the protection of UNESCO since 1997., recognized as a true example of urban continuity, an old town with a number of intact Renaissance and Baroque buildings and churches from the Venetian period. You can really get a sense of the Mediterranean while sight seeing and wandering the narrow streets of Trogir, sometimes nick-named the town-museum. Trogir is very well connected with the rest of the Europe through a good air network to Split’s airport. After you’ve reached Split, you can take a car or a bus, and you are in this beautiful old town within a few hours. There is a lot to see in such  a small place, so keep your eyes wide open while o  bserving what Trogir has to offer, such as a well preserved castle and a tower, palaces and cathedrals from the 13th century.

If you want to know more about Trogir, click here: Trogir