Seaview old stone house in a row for sale, Korcula island, located in a small village on island Korcula.
House has 67 m2 of living space and infield is 10m2 size. Its sittuated on very perspective location, only 200m away from the ferry port. The house needs complete renovation what gives possibility of decorating it according to your own taste.
It consists of ground floor where is one bedroom with bathroom and with separate enterance in the house.
On the first floor of the house there are two bedrooms, kitchen and bathroom and on the second floor of the house there is spacious terrace with beautiful panoramic view on the sea and port. The first and second floor of the house are above the old stone vaults that goes with the old-fashioned spirit and give a special atmosphere. 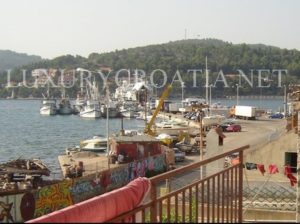 This is one of the most densely wooded islands in the Adriatic. The landscape of the island of Korcula is enriched by olive groves and vineyards which represent a traditional source of life and income for the population of the island of Korcula. Korcula is considered as the pearl of the southern Dalmatia and offers to its visitors picturesque walled old town of Korcula, magnificent coastal panoramas, dreamlike fishing villages and stunning coves. The coast of the island of Korcula is very indented with a large number of bays and coves. It’s north shore is rather low and easily accessible with several natural harbours: Korcula, Banja, Racisce, Vrbovica, Babina and Prigradica. The island of Korčula represents a unique fusion of beautiful nature, thousands of years of cultural tradition and history, and modern tourism. Numerous beautiful beaches and bays, luxurious hotels and summer houses, centuries old olive groves and vineyards, and ancient towns and villages on the island which seem as if they have remained lost in some long past time attract tourist from all over the world to this island.