Nice house for sale in Korcula Island, semi-detached with 6 apartments ready and equipped for rental, only 500 meters from the sea on Korcula Island. In each apartment you can find a bedroom, a kitchen and a bathroom.
All of the apartments are air conditioned, and they have their own balcony. There is enough space for approximately 5-6 cars to park. In the yard there is a barbecue and a wonderful olive tree, a perfect place for guests to sit, relax and have a nice meal.
The footprint surface of the house is 125 square meters. 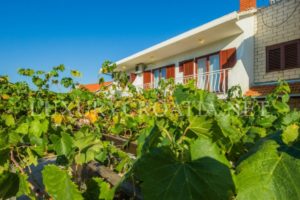 Korcula, the island of Marco Polo, is one of the most densely wooded islands in the Adriatic. The landscape of the island of Korcula is enriched by olive groves and vineyards which represent a traditional source of life and income for the population of the island of Korcula. Korcula is considered as the pearl of the southern Dalmatia and offers to its visitors picturesque walled old town of Korcula, magnificent coastal panoramas, dreamlike fishing villages and stunning coves.The coast of the island of Korcula is very indented with a large number of bays and coves. It’s north shore is rather low and easily accessible with several natural harbours: Korcula, Banja, Racisce, Vrbovica, Babina and Prigradica. The island of Korčula represents a unique fusion of beautiful nature, thousands of years of cultural tradition and history, and modern tourism. Numerous beautiful beaches and bays, luxurious hotels and summer houses, centuries old olive groves and vineyards, and ancient towns and villages on the island which seem as if they have remained lost in some long past time attract tourist from all over the world to this island. Korčula is among the most beautiful and best preserved medieval towns on the Croatian coast and in all of the Mediterranean, and is often referred to as “Little Dubrovnik.