SOLD: House for sale with an old city view, Korcula

House with an old city view, Korcula, this house is situated in a very attractive location in Korcula island, with beautiful view over the old town. You will also be able to enjoy some privacy due to the yard that separates the house from the street side and the back of the house, and the pantry and high cistern which can be adjusted into residential area.
The house needs complete adaptation, and it sets out over two floors. There is a possibility of upgrading.
5 bedrooms available,and there is a garage within the house as well.
There are connections to the city sewer, and ownership certificate is obtained.
Parcel size- 162 square meters.
Yard size: 75 square meters. 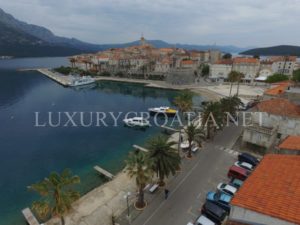 This is one of the most densely wooded islands in the Adriatic. The landscape of the island of Korcula is enriched by olive groves and vineyards which represent a traditional source of life and income for the population of the island of Korcula. Korcula is considered as the pearl of the southern Dalmatia and offers to its visitors picturesque walled old town of Korcula, magnificent coastal panoramas, dreamlike fishing villages and stunning coves.The coast of the island of Korcula is very indented with a large number of bays and coves. It’s north shore is rather low and easily accessible with several natural harbours: Korcula, Banja, Racisce, Vrbovica, Babina and Prigradica. The island of Korčula represents a unique fusion of beautiful nature, thousands of years of cultural tradition and history, and modern tourism. Numerous beautiful beaches and bays, luxurious hotels and summer houses, centuries old olive groves and vineyards, and ancient towns and villages on the island which seem as if they have remained lost in some long past time attract tourist from all over the world to this island.