Exceptional Luxury Villa for Rent, Dubrovnik: Villa is the best way to experience the ancient and luxurious city of Dubrovnik! One of the first villa`s guests was a Hollywood Oscar winner. Formerly the residence of the famous archaeologist Sir Arthur Evans (from 1875 to 1882), the villa has been designed to a signed to a high degree of luxury with many interesting and valuable antique details. The interior is filled with art, including works by most respected Croatian artists Milovan Stanić and Romana Milutin Fabris.

Villa is a 270 square meter exclusively designed summerhouse, situated on a cliff above the Adriatic Sea, between the Old Town and the majestic Island of Lokrum. A Mediterranean style dominates the interior, adorned with details inspired by the Far East. The heart of the house is the spacious fireplaced living room and dining room. It has three luxurious bedrooms whose rustic wooden floors, timber ceiling beams and rich fabrics reflect a spirit of antiquity.

The minimum stay in July and August is 7 days.

Prices may vary depending on the number of booked days 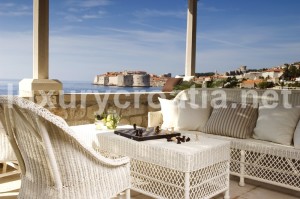 The walled city of Dubrovnik was described by George Bernard Shaw as “paradise on earth”. The old city is a protected UNESCO World Heritage Site and is surrounded by spectacular fortified walls up to 25m high and 6m thick. Founded in the 7th century on a rocky island called Laus, it later became known as Ragusa. The Venetians gained control of the city at the beginning of the 13th century but, by the end of the 14th century, Dubrovnik had essentially become an independent city-state and had established a lucrative trading position with the Ottoman Empire.
If you want to know more about Dubrovnik, click here: Dubrovnik
If you want to plan your route to Dubrovnik, look here: ViaMichelin
< Back to Properties Listing Save Offer Print this Page Send to a Friend