Apartment near sea for sale, Ciovo

Apartment is situated on the south side of Ciovo island only 100 meters from the seafront. Apartment has a surface area of 32 m2 and consists of 1 bedroom, kitchen with dining and living room, 1 bathroom, hallway and a balcony. Price is 60000 €.

The apartment is less than 10 min drive to Split international airport.

Ciovo is an island situated in middle Dalmatia, connected with the city Trogir by drawbridge, and administratively divided between Split, Trogir and Okrug.

Total surface of the island is 28,8 km2 and there are several villages: Okrug Donji (Lower,) Okrug Gornji (Upper), Arbanija, Slatine, Žedno and Ciovo. Čiovo is about 2 km away from the mainland on the east (cape Marjan); on the north-west, it is connected with mainland by drawbridge (in Trogir). 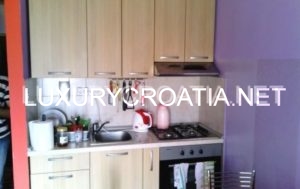 The apartment is close to the town of Trogir. The  historic city center is under the protection of UNESCO since 1997., recognized as a true example of urban continuity, an old town with a number of intact Renaissance and Baroque buildings  and churches from the Venetian period. You can really get a sense of the Mediterranean while sight seeing and wandering the narrow streets of Trogir, sometimes nick-named the town-museum.  Trogir is very well connected with the rest of the Europe through a good air network to  Split’s airport. After you’ve reached Split, you can take a car or a bus, and you are in this beautiful old town within a few hours. You can also come with a boat, coming from the coastal cities of Italy, such as Ancona, Pescara, Bari or Venetia, and if you are coming to Trogir while cruising on your own boat, you will surely find a port for you to anchor in and enjoy, either the ACI Marina Trogir, Trogir Waterfront or on the island Ciovo waterfront.