The Island of Šolta is situated near Split, and, with only 9 nautical miles of distance and 6 ferry lines and 1 speedboat line per day during the season between them, has become practically a suburb of Split. Visit us if you’re nearby- swap the perpetually crowded roads leading to cramped city beaches for a ferry ride, cool down on its deck and, in less than an hour, arrive at a destination with crystal clear sea, Grohote lies on the edge of Šoltansko polje, at the intersection of the road connecting Stomorska and Maslinica, the two farthest villages on the island, and leading to the port of Rogač. Šolta’s oldest and largest settlement has always been the economic and administrative center of the island, despite the fact that its inhabitants were mostly lime-burners, farmers and fishermen. Municipal offices, a post office, a clinic with a helideck, a pharmacy, a volunteer fire department, and a police station are among Grohote’s major public facilities. The very center boasts narrow, irregular alleys that close the residential buildings into partially separated units with atriums and taverns, and give away the old rustic Mediterranean charm that no one who walks through its stone alleys can resist. These old and invaluable architectural gems contribute to the authenticity of the island setting, and this is why all reconstruction works are planned in a way to preserve its traditional architectural values. A number of scenes from the famous Croatian TV series Velo Misto, filmed mostly in Grohote, give a true presentation of the island lifestyle.

If you want to know more about the island of Solta click here.

If you want to know more about buying property in Croatia click here. 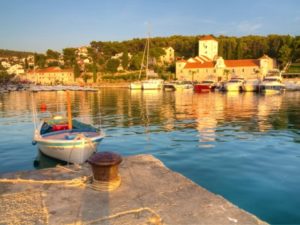