STUDIO APARTMENT WITH TERRACE FOR RENT IN SPLIT

STUDIO APARTMENT WITH TERRACE FOR RENT IN SPLIT

STUDIO APARTMENT WITH TERRACE FOR RENT IN SPLIT  has terrace on the south side in south part of Split walking distance to the beach Bacvice. Apartment has open bedroom with double bed.. There is free parking just in front of apartment.

New kitchen is equipped with all cooking necessities. There is large bathroom and a washing machine. Apartment is 20 minutes walking distance from Ultra festival stadium and 10 minutes walk to the central sea front promenade and Diocletian’s Palace and other city amenities. 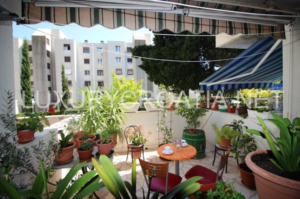 The city of Split is the largest city in the Dalmatian region and the second largest city in whole Croatia. It’s considered to be over 1700 years old, making it one of the oldest cities of this area as well. Split is a great connection to other cities and islands of Dalmatia all due to its great location, siting in front of the beautiful blue water of the Adriatic and backed up with impressive mountains. The center of Split is marked with the Roman Palace of the Emperor Diocletian, listed as a UNESCO World Heritage site for being one of the most impressive Roman constructions that is extraordinary preserved. The entire historic city core is on the same UNESCO list from 1979. You will see some great examples of the ancient architecture, such as the Peristyle(the main open space of the palace, surrounded with a colonnade of six columns and an arch in the centre).

If you like to spend active holidays, check our offer: Excursions, Trips and adventure sports.