Seaview apartment for sale, Cavtat, Dubrovnik area: A wonderful and spacious apartment in Cavtat, 107 m2. Excellent position, beautiful sea view and completely furnished. It has two large bedrooms and one smaller, as well as a nice balcony and an outside space with the parking place. There is also a spacious living room and wonderful kitchen, hall with large closets, storage space…

Everything is brand new and maintained, on a peaceful location close to the all important contents. There is an option to make two apartments so it would have an excellent renting potential. 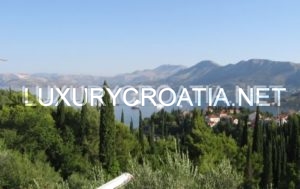 The walled city of Dubrovnik was described by George Bernard Shaw as “paradise on earth”. The old city is a protected UNESCO World Heritage Site and is surrounded by spectacular fortified walls up to 25m high and 6m thick. Founded in the 7th century on a rocky island called Laus, it later became known as Ragusa. The Venetians gained control of the city at the beginning of the 13th century but, by the end of the 14th century, Dubrovnik had essentially become an independent city state and had established a lucrative trading position with the Ottoman Empire. In 1815 it was handed over to the Austrians by order of the Congress of Vienna and incorporated into the province of Dalmatia. Dubrovnik has a lot of tourist attractions, such as walls of Dubrovnik that represent the city’s main trademark. The walls run from four to six meters thick on the landward side but are much thinner on the seaward side.The system of turrets and towers were intended to protect the city.
Another favorite tourist attraction are the Dubrovnik town gates. Dubrovnik town has four city gates: two that lead to the harbor and two that lead to the mainland.

If you want to know more about Dubrovnik,click here: Dubrovnik