House with panoramic view is a newly built house in finishing works, located in Sinj, a beautiful old town in the countryside of Dalmatia, an only half hour drive from Split. House is on the hillside surrounded with greenery and has a panoramic view of the town of Sinj, historic place with a lot to see and experience. House has two floors, on the ground floor there is a garage and one bedroom apartment. On the first floor, there is two bedroom apartment, with two balconies, open plan kitchen with dining and living area, bathroom and two bedrooms. On the backside terrace there is a separate storage house and above it a summer kitchen. There is also a garden with a barbecue, closed in a beautifully wrought iron fence. The outside facade of the house isn’t finished, and inside needs floor cover (tiles and laminate) and painting. Price is negotiable. 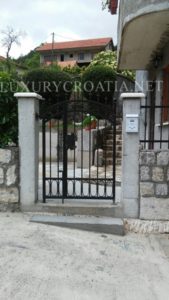 The city of Split is the largest city in the Dalmatian region and the second largest city in whole Croatia. It’s considered to be over 1700 years old, making it one of the oldest cities of this area as well. The town  Split has a great connection to other cities and islands of Dalmatia all due to its great location, sitting in front of the beautiful blue water of the Adriatic and backed up with impressive mountains. The center of Split is marked with the Roman Palace of Emperor Diocletian, listed as a UNESCO World Heritage site for being one of the most impressive Roman constructions that is extraordinary preserved. The entire historic city core is on the same UNESCO list from 1979. Diocletian wanted to spend the last years of his life in peace within the walls of his Palace, built near the great Roman city of Salona.