Building land for sale on a plot of 974 m2. Land is in the first row to the sea. Getting a location permission to build a house is in a proces.

Dugi Otok (Croatian for “Long Island”, Italian: Isola Lunga) is the seventh largest island in the Adriatic Sea, part of Croatia. It is located off the Dalmatian coast, west of Zadar. It is the largest and easternmost of the Zadarian Islands, and derives its name from its distinctive shape (it is 45 km (28 miles) long by 5 km (3 miles) wide with an area of 114 square kilometres (44 sq mi). Its elevation reaches 300 m; and many of its higher portions contain stands of Maritime Pine.

The western coast is tall and rugged, and many of the towns are clustered on the eastern side, including Sali, the largest, Božava, Dragove, Soline, Brbinj, Luka, Polje, Verona, Savar, Veli Rat, Zaglav, and Žman. A nature park, Telašćica, covers the southern part of the island and is adjacent to Kornati Islands National Park.

he island has been inhabited since prehistoric times. The Byzantine Emperor Constantine VII in the 10th century mentioned it under the name of Pizuh, and later it was called Insula Tilagus in documents (“pelagos”in Greek means sea), and its Latin name was Insula maior. In the 15th century it was registered as Veli otok.

The old and main settlement on the island was located in the southern area. It has only been inhabited significantly since the Turkish invasions (15th-16th centuries). Until then the island belonged to Zadar monasteries and citizens. Nowadays there is a total of 10 settlements on the island, and they are all on the north-eastern side of the island concerned primarily with fishing, although salt was once produced here.

The village of Veli Rat is also home to the Veli Rat lighthouse, another spectacular sight. The beautiful island of Dugi Otok, with a Mediterranean climate and ancient Croatian culture, receives very few visitors. Olive oil, figs, cheese and wine accompany the seafood in the natives’ diet. A definite step back in time, the island boasts an ancient pre-Roman church and some Roman ruins. It is in close proximity to Kornati. 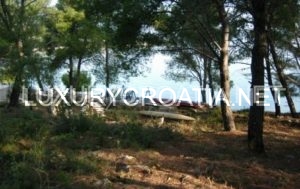