This apartment for sale in old stone house, old town Split has 50 square meters, on the second floor of the old stone house in the old town of Split. Apartment is a part of cultural heritage zone and consists of 2 bedrooms, bathroom, kitchen and dining-sitting area. Apartment is in good condition, ready to move in, has windows facing two streets (south and north).
Apartment is ideally located for tourist rental business. (it is possible to get income of 15-20 000 eur per season from tourist rent).

Apartment is in old part of the town Split where everything is within walking distance, from restaurants, bars, waterfront promenade, exclusive shops. Car access is only 50 meters away. 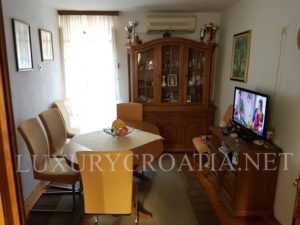 The city of Split is the largest city in the Dalmatian region and the second largest city in whole Croatia. It’s considered to be over 1700 years old, making it one of the oldest cities of this area as well. Split is a great connection to other cities and islands of Dalmatia all due to its great location, siting in front of the beautiful blue water of the Adriatic and backed up with impressive mountains. The center of Split is marked with the Roman Palace of the Emperor Diocletian, listed as a UNESCO World Heritage site for being one of the most impressive Roman constructions that is extraordinary preserved. The entire historic city core is on the same UNESCO list from 1979. Diocletian wanted to spend the last years of his life in peace within the walls of his Palace, built near the great Roman city of Salona. The area shows a true coexistence of tradition and modernity, with the palace nesting around numerous cafes and restaurants on Split’s waterfront decorated with beautiful palm trees just next to the sea. Just a few steps into the centre will have you wandering the narrow Mediterranean streets and old city walls through the vivid history of Split.