Apartment house with restaurant for sale, Pirovac, Sibenik consists of 4 apartmens. Each apartment has its own terrace. In the ground floor there are two bedrooms, two toilets and space od 100 m2 for tourist purposes. In the basement there is a wine shop of 25 m2. House has a plot of 829 m2, distance from the sea is 350 meters. Beside the house there are two terraces of 42m2 and 63m2.
Parking for guests of 135m2. Near the parking lot there is a warehouse of 25m2 . Energy certificate in the process . 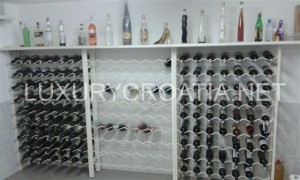 Sibenik is a historic city located in the central part of the Croatian coast on the Adriatic sea where the beautiful river Krka flows into the Adriatic. It is a centre of the county of Sibenik and Knin and it extends along the 100 km long coastline from Zadar to Split while laying under the Dinara mountain in the hinterland area.

The city is different from other cities on the coast because it was founded by Croats and not by Greeks, Illyrians or Romans, meaning it is the oldest native Croatian city on the Adriatic. For a while, Sibenik was a seat for the Croatian king Kresimir the fourth so it is sometimes called the Kresimir’s city. Sibenik’s rich history and appearance was influenced by Venice, Byzantium and Hungary who were tossing Sibenik around in the 11th and 12th centuries, and in the 14th century, the hinterland of Sibenik accomodated the Vlachs.

If you want to know something about Sibenik, click here: Sibenik