Pag, island of cheese and rocks

Pag – island of cheese and rocks

Pag is an island with the longest coastline located in the north part of the Adriatic Sea, fifth by its size in the Croatian coast. Pag island is unique because it is the only island that is administratively divided between two Croatian counties, the Lika-Senj and Zadar county.There are many small villages and destinations to visit on the island, but the most notable cities are Pag and Novalja. Novalja is located in the north of the island and has recently became famous because of the Zrce beach, one of the biggest summer party zones in Europe.
Pag Island is quite different from other Croatian islands in the Adriatic, mostly because of the stony look and the stone white that ocuppies over 85% of the islands surface. It is therefore not surprising that it has a nickname as the “Island of Rock”.
Stones are however, far from what Pag has to offer to its visitors, going from the ancient monuments and gastronomy delights to the magical nature, pebbly and sandy beaches and bays with clear blue sea along its coastline of 270 kilometeres. If you are looking for a sunny vacation, this island is the perfect destination, known as one of the sunniest islands in the Adriatic.
Pag can also take pride in its rich cultural heritage. Women from Pag contribute here with their handmade  lace, a unique handicraft that only a native could produce as skillfuly as they can. Lace making originates from the 15th century when it was created for the Benedictine church that had a school of lace. The nuns, luckily, managed to save and collect their work for 150 years which has now been declared as the Croatian cultural heritage. This lace is unique because there are no blueprints or templates into making it- the only way of preserving this production for years have been passed down through generations by word of mouth and practice. Today, you can see the lace makers on the streets as they create their masterpieces with their own two hands, and in the city center you can observe the beautiful artwork in the Pag lace Gallery. 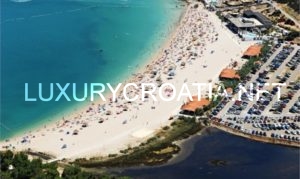 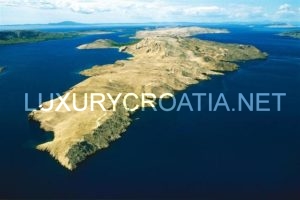 Tradition of folk dance is celebrated  so you can see a number of their variations, such as Paski tanac, folk dance in the traditional costumes followed with the music instrument misnice, folk drama Robinja or Slave Girl or Pasko kolo which is danced to the sounds of urban music. These are all presented during the carnival season that has a tradition of over 80 years and events as Summer of Pag and Ethno evenings when the island truly comes to life. 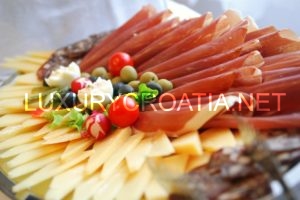 Besides the tradition, Pag takes pride in its valuable gastronomy offer. Along with the lace, another symbol of this island is its cheese, produced only from the sheep milk of autochtonous sheeps form Pag called pramenka. This product is used to represent not only Pag, but whole Croatia in many fairs of the European Union. The quality and uniqueness of the cheese derives from the winds from Velebit, that uplift the saltness from the sea to the vegetation that sheeps eat, and that is where the special taste and smell of this cheese comes from. This is also the reason for the high quality lamb that you can find on this island, as well as for the salt production on the island to be considered as another white gold of Pag.

If you are interested in renting a holiday villa on the island of Pag, you can find them here; Rent Villa Pag

If you are interested in buying a property on the island of Pag, you can find them here: Real estate for sale Pag Island