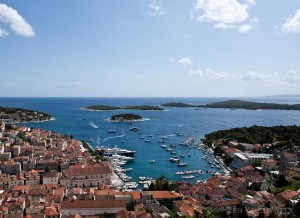 Hvar: One of the Top Croatian Destinations

RETIRE IN CROATIA – FORBES magazine says why you should

Sitting across the Adriatic Sea from Italy, Croatia offers great beauty, a mild Mediterranean climate, ancient culture, tax breaks for retirees and low cost of living. The Institute for Economics & Peace ·ranks it higher than the U.S. for safety and security.

Well, Forbes can’t claim to have been the first to recommend the Croatia’s Dalmatian Coast as a retirement destination. That title goes to the Roman Emperor Diocletian (AD 245-316), the only Roman emperor ever to retire. He chose to spend his golden years in his palace in Split, where he remained until his death in year 316. The Diocletian Palace was declared a UNESCO World Heritage site in 1979 and it remains at the heart of Split, Croatia’s second-largest city, on the coast of Adriatic Sea, as capital of Dalmatia.

Furthermore, the retirees in Croatia are exempted from paying income tax. Living in Croatia assures that you can enjoy a healthy life. Fresh natural foods and good medical facilities have increased the rate of life expectancy of the people. You will find many specialized polyclinics, hospitals and medical centers countrywide.

Celebrities are rediscovering what tourists knew in the 1980s. Croatia — on the Adriatic arm of the Mediterranean – rivals other European top seaside areas with beaches, sailing, and superb cuisine that’s attracted superstars like Steven Spielberg, Beyonce and Jay Z, Madonna, Andre Agassi, Gwyneth Paltrow, Robert De Niro, Clint Eastwood, Sharon Stone, Caroline of Monaco, the Prince of Hanover, the King of Jordan and the Prince of Oman, businessmen like Bill Gates, Bernie Ecclestone, Roman Abramovic, Deripaska, Melnichenko, Zeleznjak etc. Many of them are owners of residential properties in Croatia, and also business investments.

Croatia is now one of European Union countries, so EU citizens are now able to buy on the same terms as local Croats (except for agricultural land). (For non-EU citizens applies reciprocity rule and consent of the Ministry of Justice, which is obtained in short time). This advantage now speed up the property buying procedure, and encourage more foreigner buyers to purchase in Croatia with confidence. Besides, we are licensed Croatian real estate and tourist agency and offer professional service and care to foreign buyers, leading them through buying procedures and explaining all steps of buying process, with assistance of experienced lawyers, which makes buying procedures safe, fast and with no risk.

This is a story about a land of a thousand islands, her magical nature and rich heritage, her great Men whose great deeds have forever etched the name of Croatia in large letters on the map of the world. This is a story about a land whose beauties have been celebrated since ancient times. From Cassiodorus, who wrote of the divine life led by Patricians on her shores, to Dante, who wrote his immortal verses, enthralled by the epic scenes of the blue expanse, and all the way to George Bernard Shaw, who found his paradise on Earth right here. Croatia has always been a place of true inspiration.

Croatian treasures – the Mediterranean as it once was…

Croatia is one of the ecologically best preserved parts of Europe. It is a land where the hues of the sunny and warm Mediterranean happily blend with the tranquillity and freshness of mountains and the gentle sway of the golden plains of Pannonia. A land of truly divine inspiration that has delighted many of the world’s prominent men of letters. A rare European landscape which boasts as many as eight nationa parks in so small an area!

With Risnjak, Paklenica, the Plitvice Lakes and Northern Velebit in the mountainous area, and with the Kornati Archipelago, the island of Mljet, the Brijuni Archipelago and the Krka waterfalls in the coastal area, Croatia is indeed a jewel of the primeval beauty of nature. Adding to that two arboretums, one in Trsteno, near Dubrovnik, and Opeka, near Vinica, numerous historical parks and protected nature parks, it is indeed a green land, with as many as 4300 plant and as many animal species.

Do not delay: sail the azure blue waters of the Adriatic and discover the island which is one of the last habitats of the griffon vulture in Europe. For dedicated nature lovers in Croatia you can put to sea with an adopted dolphin or, if you are particularly lucky, encounter the mysterious and rare Mediterranean monk seal. Whatever you decide to do, you will find that this is a place where the colours of nature are at their warmest and fullest.

The Croatian cuisine is diverse and known as a cuisine of different regions. Its modern form originates from the  ancient times. The differences in the selection of ingredients and preparation methods are the most obvious if we compare the continental and coastal regions.

The coastal region is characterized by the influences of the Greeks, Romans, Illyrians and later Mediterranean cuisines – Italian and French. It features many seafood specialties (squid, cuttlefish, octopus, shrimp, lobster…) prepared in various ways, olive oil, prosciutto, various vegetables, Dalmatian wines such as Babic, Malvasia, Prosecco and Vrbnik Žlahtina, and various liqueurs like the famous Maraschino.