When you think of Croatia, what is first that cross your mind? Beauty of landscapes, crystal blue waters of Croatian Adriatic Sea, friendly people, beautiful beaches, relaxed way of life, rich history and heritage, variety of gastronomic delicacies, variety of cultural influences, mix of cultures, centuries of stone palaces from Greek and Roman times still standing and witnessing thousands of years of history… Or if you have not yet experienced all this, now is time. Do not hesitate, all your expectations will be fulfilled, and much more, you will fall in love with Croatia, like thousands before you did. And stayed, or at least return every summer to enjoy in this natural beauty, preserved nature, friendly people…

We are here to help you. We are Croatians. We are happy to show you our precious homeland and to see you enjoying as much as we do.

Therefore, if you plan to visit Croatia just to relax in summer time, away from crowd, in a quiet yet beautiful seaside location in some hidden bay in some holiday villa, contact us. 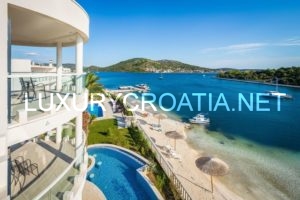 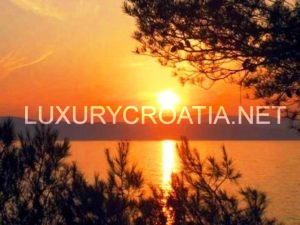 Or if you already visited Croatia and want to be happy as we Croatians are, and you decided to buy home here, contact us to offer you just the right one for you. 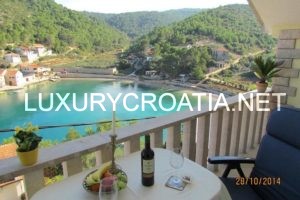 Istria has been always compared to Italian Tuscany, but I would say that Istria is much more than Tuscany, because Istria has coastline and islands, where the most famous are: Porec, Umag, Rovinj, Pula – on the coast, Brijuni islands (near Pula) – national park with rich flora and fauna, and many stone villages inland of Istria. 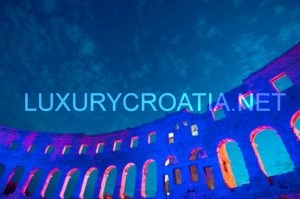 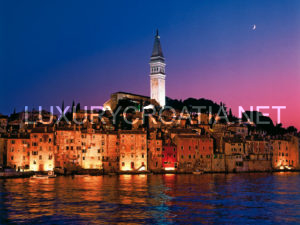 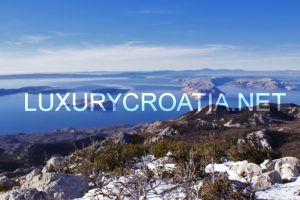 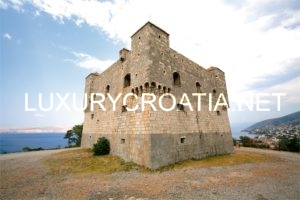 North Dalmatia is south of Kvarner and includes island of Pag (“naked” island – surface of the north side of the island is rocky, nothing but rock, like you landed on the Moon, must see! This is due to strong north wind “bura” which blows 200 km per hour in winter, so nothing can resist this force of nature except – rock!), Kornati archipelago – national park – words can not describe this wonder, hundreds of islands like pearls and azzure sea water shimmering on the sun, this is nautical paradise; Ugljan, Pasman and Dugi Otok – islands in front of Zadar. By the way, sunset over Zadar is THE most beautiful for sure, I personally witnessed several times. Colours of the sky on the sunset are indescribable! 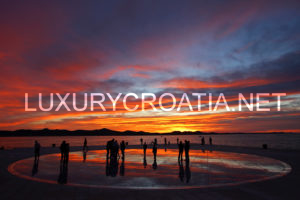 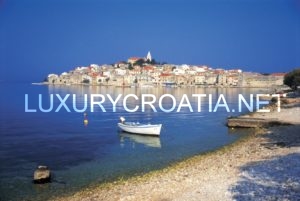 North Dalmatian coastal towns are: Zadar – rich in history dating from old Greek and Roman times, Nin – many Croatian kings were crowned in this small historic town, which also has salt production museum and remains of the salt production facilities; Sibenik – culture and rich heritage makes this town important on every tourist route; Vodice and Tisno (Murter) – summer music festivals attract thousands of young people to these destinations; Primosten – picturesque islet connected with bridge which became road, to the mainland, preserved old stone village with beautiful beaches; Rogoznica – another island connected to the mainland with bridge, there is large marina for yachts. There are many small villages that are beautiful and interesting for tourists or people who plan to buy house or apartment in this area.

Middle Dalmatia – it is hard to describe this region in only few sentences. Each of destinations are additionaly described in other pages. Capital of Dalmatia is coastal city of Split (second largest city in Croatia, about 250.000 inhabitans). This is where our agency is located, close to the sea, near the beach of Znjan, on the east part of Split. Split has 1700 years of history. Formed by the Roman emperor Diocletian who started to build his Palace in 305. a.d. as place to retire. Palace is even today still here, and it is the best preserved palace from Roman times in the world. Palace is UNESCO protected heritage. 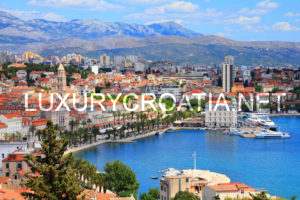 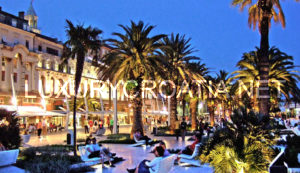 Other towns in Middle Dalmatia are: Trogir, with UNESCO protected chatedral, has also rich history, this is town of more than 20 church bell towers! Old town of Trogir is also an island connected with bridge to the mainland, and there is other large island of Ciovo which is connected to Trogir.

Omis is also an old stone town on the sea, beneath high rocky mountain and mouth of river Cetina into the sea in the center of the Omis.

Makarska is another beautiful coastal town beneath high mountain of Biokovo, which peak is in the clouds mostly. Biokovo mountain is national park, and easy reached by car as the road goes almost to the top of the mountain, from which there is breatheaking view of Makarska and islands of Brac and Hvar in front. Aside of Brac there is small but green island of Solta with preserved nature and hundreds of years old coastal villages, where people still live on growing olives and vineyards. Another small, green, beautiful but distant island Vis 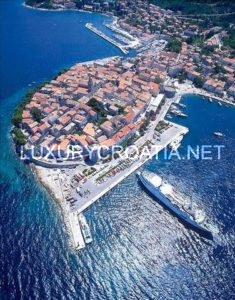 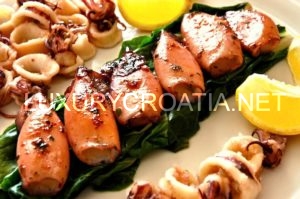 South Dalmatia is mostly known for its pearl in the jewel, town of Dubrovnik, described in details on another page. There is Dubrovnik airport which is close to Cavtat, another beautiful old town on the coast south of Dubrovnik. Inland of Dubrovnik and Cavtat are Konavle villages, picturesque landscape characterized with woods of cypresses and pines. There are Elaphiti islands in front of Dubrovnik (Sipan, Kolocep, Lopud). North of Dubrovnik are villages of Zaton, Slano, Orasac, and more towards north is old stone wall, longest in Europe, in village of Ston, famous for its history and salt production which is active even today. Another thing Ston is famous are oysters, the best in Europe, fresh from the sea where is grown in the bay of Mali Ston. Plenty of good fish restaurants offer oysters and mussels, black risotto, and other sea delicacies to die for!

Ston is at the beginning of Peljesac peninsula, famous for vineyards and wine sort Plavac Mali on positions of Dingac and Potomje. An hour drive through the wineyards you arrive to coastal village of Orebic, known for old captain houses. Those are stone houses in characteristical Dalmatian style. In 15 minutes by ferry you are already on Korcula island and town of Korcula will amaze you with its beauty. Korcula is birth place of famous Marco Polo! Must visit his house turned into museum. Another two islands in South Dalmatia are Lastovo (green isolated island where time has stopped few hundred years ago) and Mljet (national park, preserved nature and old stone villages). 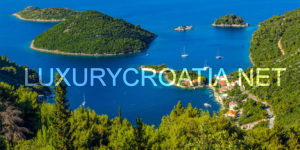 If you are interested in renting a holiday villa in Croatia, you can find a lot beachfront villas for rent here.

And if you are interested in buying a property in Croatia, you can find more than 1300 properties for sale in Croatia here.