Seafront house on the beach for sale Zadar area Croatia

Seafront house on the beach for sale Zadar area Croatia

This seafront house on the beach for sale Zadar area Croatia is located in quiet area of the coastal village in Zadar Riviera. House is newly constructed, furnished completely, with 180 square meters of living space and positioned on a land plot of 300 square meters. It consists of ground and first floor.

House is connected to the electricity and city water, there is water tank and thermal facade. It is fully air-conditioned, has a chimney for heating to which it is possible to connect a solid fuel stove. The nearest shop is distanced 200 m, and the restaurant 500 m. House has car access from aside and front. The beach in front of the house is partly pebble and rocky but shallow waters. Price for Seafront house on the beach for sale Zadar area Croatia is 455 000 EUR.

Zadar is a beautiful, 3000 years old centre of North Dalmatia, resting on the coast of the Adriatic sea that will give you an opportunity to testify its vivid history and enjoy the contemporary aspects of its culture today. Zadar evolved a lot through the years, transforming itself from a prehistoric settlement to an Illyrian village to a Roman municipality and surviving other transformations until it was finally liberated and reunited with the rest of Croatia in 1993. As the Croatian National Tourist Board says, the region of Zadar tells the story of the sources of Croatian cultural heritage better than any book. There are other mesmerising things to see in Zadar. The Sea Organ, situated on the west side of Zadar’s riva, appearing to be only a few stairs descending into the sea, whilst hiding the genius engineering that hides under the sea. The same architect designed The Greeting to the Sun, a 300 multi-layered glass in the shape of a circle which has photo-voltage solar modules that can communicate with light. 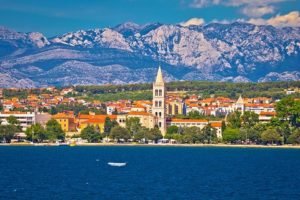