Sea view apartment villa for rent on island Lopud can accommodate up to 12 people.

Villa consists of 6 bedrooms, one with queen size bed and other ones with twin beds and 7 bathrooms. The units come with hardwood floors and feature a fully equipped kitchen with a microwave, a dining area, a flat-screen TV with satellite channels, and a private bathroom with shower and a hairdryer. Some units include a seating area and/or a terrace. Outside of the villa is a swimming pool with shared lounge and BBQ facilities. Villa offers free WiFi and air conditioning. Pets are allowed on request, no extra charges!

We have the most luxury villas in Dubrovnik for rent. The walled city of Dubrovnik was described by George Bernard Shaw as “paradise on earth”. The old city is a protected UNESCO World Heritage Site and is surrounded by spectacular fortified walls up to 25m high and 6m thick. Founded in the 7th century on a rocky island called Laus, it later became known as Ragusa. The Venetians gained control of the city at the beginning of the 13th century but, by the end of the 14th century, Dubrovnik had essentially become an independent city state and had established a lucrative trading position with the Ottoman Empire. In 1815 it was handed over to the Austrians by order of the Congress of Vienna and incorporated into the province of Dalmatia. 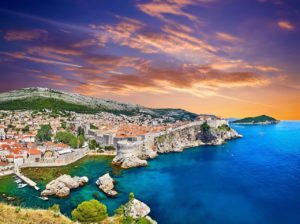