Old stone house (ruin), island of Olib ruins of 70 m2 (7X10m2) on the island of Olib – oasis of peace, with a small garden surrounded by a stone wall, all on a plot of 117 m2, 500 m away from the sea.
Complete renovation needed. Slight elevation provides additional low attic space. The house can be divided in two units, each with separate entrances. 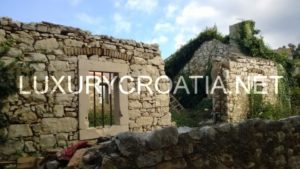 Island of Olib (26,14 km2) belongs to the north Dalmatian group of islands, Zadar group precisely.
Olib is significantly different in summer than most of the islands. Instead of a large number of visitors and mass tourism, Olib is peaceful and relaxing even at the highest summer season.
The island is connected to the mainland (Zadar) with daily ferry or catamaran lines.
Olib is mostly visited by sailors because of its bays and sandy beaches. There is one of the most beautiful sandy beaches on the Croatian coast – Slatinica bay.

Olib is an island in Zadar archipelago, located just a bit eastern of Silba Island. The island itself is a very low and flat, with highest peaks Kalac – only 72 meters and Poljina, 34 m hight .
The largest bay is Olib located on the western part of the Island, and the only village on the island that dates back to Roman times. Historically, the island was inhabited by Romans, and it is firstly mentioned in documents from the 10th century as Aloep Island. In the cove of Banve there are remnants of a settlement dating from Roman times.

If you want to know more about Zadar, click here: Zadar