Old stone house with a beautiful sea view on amazing Location in Bol, Brac Island is a three bedroom house for sale on excellent location, close to the famous Zlatni rat beach. It is one storey house of 70 sq m situated on the plot of 643 sq m. The house was built in 1958. but it was renovated in 2009.

This is unique opportunity of purchasing property in the most popular and exclusive location on Island of Brac. This property is located on the promenade to the Zlatni rat beach. Present house is habitable but it is possible to acquire building permit for much bigger house with swimming pool, so this house could also be an investment opportunity and not only an excelent holiday home.

More information about the Island of Brac: The island is located pretty close to the mainland, especially to the city of Split so you can arrive to the island easily. Brac has its own small airport, open mostly during the summer season, but it is more likely that you would arrive with air traffic to the airport in Split, and then transfer to a ferry from Split to Supetar ( duration is around 50 minutes) . The ferry lines are quite often in the summer time so there shouldn’t be any problems in reaching this island. You can also take a catamaran from Split to Bol and arive in 55 minutes, or take a weekly catamaran that runs from Split to Milna for 30 minutes. There are other places from where you can get to Brac, such as a ferry form Makarska to Sumartin, or by catamaran from Dubrovnik to Milna in 4 hours and 15 minutes. Once you do get on Brac, the best way to get around is either with your own car or with a bus that runs between all of the major resorts on the island.
One of the main reasons to visit Brac are its beaches, some of the best in Croatia. The most famous one is Zlatni Rat, or Golden Horn in Bol, a white pebble beach that is certanly one of the most beautiful in Croatia. The beach streches out into the Hvar Channel, where the top of the shape of the beach changes its shape because of the strong currents in that part of the sea, the tide and the winds.. This specific phenomena made it a symbol of Croatian tourism. Other beaches on Brac are pebble, rocky and some places even sandy, such as the Lovrecine, Paklina in Bol, Murvica, Osibova Bay near Milna and others. 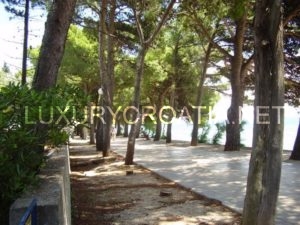