Seafront villa for sale, Korcula island is a house with a beautiful sea view, first row to the sea. It has private parking and it is half furnished and equipped. This seafront villa is organized in two stories with s land plot of 528m2. On the ground floor, you can find a large living room and a terrace with a panoramic sea view. The villa is habitable immediately. Outside the house is a big garden full of trees and Mediterranean plant life.

The coast of the island of Korcula is very indented with a large number of bays and coves. It is north shore is rather low and easily accessible with several natural harbors: Korcula, Banja, Racisce, Vrbovica, Babina, and Prigradica. The island of Korčula represents a unique fusion of beautiful nature, thousands of years of cultural tradition and history, and modern tourism. Numerous beautiful beaches and bays, luxurious hotels and summer houses, centuries-old olive groves and vineyards, and ancient towns and villages on the island which seem as if they have remained lost in some long past time attract tourist from all over the world to this island.

Korčula is among the most beautiful and best-preserved medieval towns on the Croatian coast and in all of the Mediterranean and is often referred to as “Little Dubrovnik.

Seafront villa for sale, Korcula island is a house with a beautiful sea view, where you’ll enjoy staying.

If you want to check the ferry schedule you can do it here: Jadrolinija 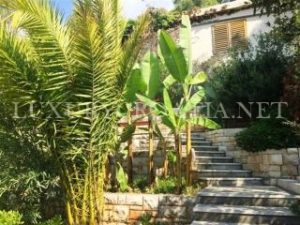