Korčula Prigradica second row to the sea building land- size of the land is 566 m2. Sea is only 60 meters from the land plot, it offers a beautiful seaview. Location is very quiet with only a couple of other houses nearby. In this price there is 100 m2 of land on the seafront right next to the road which can be used for parking.

From the land there is panoramic sea view which will not be obstructed even when new house will be built on the land below.
We offer the services of our partner construction company as well as the services of a certified architect and project manager.

Water and electricity connection is on the road which is 30 meters from the parcel. There is access road in cadastre plan, but not yet on the terrain.

Korčula is an island in the Adriatic Sea, in the Dubrovnik-Neretva county of Croatia. The island has an area of 279 km2 (108 sq mi); 46.8 km (29.1 mi) long and on average 7.8 km (4.8 mi) wide — and lies just off the Dalmatian coast. Its 16,182 (2001) inhabitants make it the second most populous Adriatic island after Krk. The population are mainly ethnic Croats (96.77% ).
KORCULA CITY – The birthplace of Marco Polo was built on the foundations of a Greek colony, and is the historical and tourist centre of the largest island in the Dubrovnik region. It is famous for its streets that are shaped in the form of a fish bone and well-preserved Gothic and Renaissance buildings.
Among them stands out the Cathedral of sv. Marko [St. Mark], whose rich interior guards the works of great Italian painters. The people of Korčula have preserved their customs and the medieval knight’s game “Moreška” that takes place on the town streets. The gentle Mediterranean cuisine will challenge the palates of even the most fastidious gourmets.

Along with the gifts of the sea (mussels, fish, crabs), delicious desserts such as Cukarin, the Dubrovnik cakes rožata and klašun go very well with the local Korčula wines – Grk, Pošip, Plavac and Rukatac.

Near the town of Korčula, there is an archipelago of 20 uninhabited islands covered with dense thicket, and an accessible coastline. Here is also the slightly larger islet of Badija with its pebble beaches and beautiful Franciscan monastery. 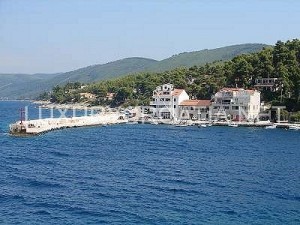